When Degas fell in love with monotype printing 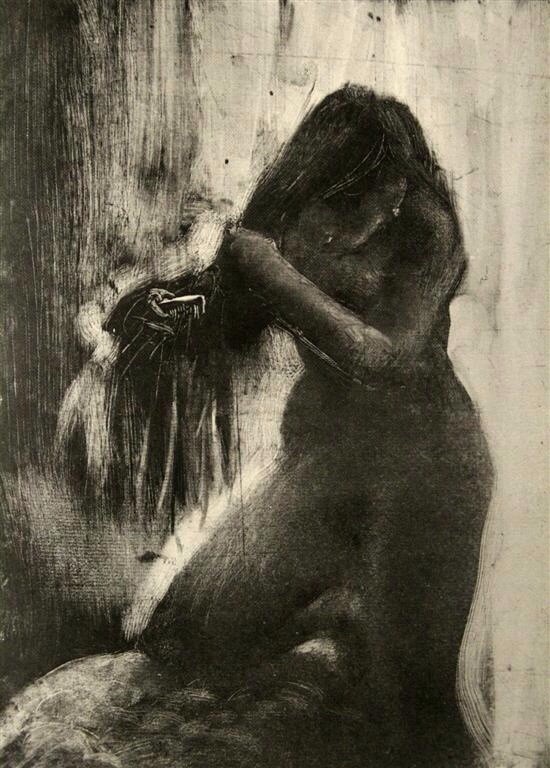 Edgar Degas first encountered monotype in the mid 1870’s and was immediately enthralled by it’s improvisational and spontaneous effects from a relatively simple process.

Senior curator at the Museum of Modern Art in New York, Jodi Hauptman insists, “Nowhere in his oeuvre is Degas as free, as unorthodox and as willing to break the rules.

In his monotypes, he is at his most modern, capturing the spirit of urban life. He depicted the body in new and daring ways, debating singularity and reproduction, liberating mark-making from tradition and boldly engaging the possibilities of abstraction. It makes this body of work tremendously exciting to investigate.

This kind of printmaking technique was pioneered by the Italian artist Giovanni Benedetto Castiglione in the 1640’s. It involved drawing on a smooth, un-incised surface with ink or paint before transferring the image onto a sheet of paper. This was done either by hand or through a press, creating a single print that could be worked on or enhanced.

Edgar Degas produced around four hundred monotypes throughout his career. He personalised them with scraping, brushing and finger painting onto the printed image.

Monotype printmaking ‘liberated’ Degas and that’s why he produced them in such quantity. He discovered it was the ideal technique for creating a unique atmosphere and intimacy and they became much sought after.

Degas monotypes are exceptionally desirable, due to their unique qualities. In the 1980’s some had reached a price tag of nearly one million dollars and would be worth more in today’s art market.

This body of work exemplifies his restless experimentation. Although he is best known for his work depicting ballet dancers, it is with this technique that he discovers new ways to explore light and dark.

The radiance of electric lighting, dancers in motion, the meteorological effects of nature and women in very intimate scenes. It was a process of repetition, transformation, mirroring, reversal and innovation.

If you would like to try this technique for yourself, join Steve Dixon RA in his life drawing workshop. Drawing directly onto a plate, from short dynamic poses, you will be amazed at the fluid quality of the prints. It’s a very exciting technique!

To browse our other courses, head to our

Author: Pegasus Art
Filed Under: Workshop News
A short history of Griffin Mill
Rembrandt ~ his portraits and palette.
Searching is in progress

Searching is in progress